The CEKOM project introductory conference for smart cities was held

The introductory conference of the Competence Center for Smart Cities project was held on Friday, 09 July, 2021 n the Exportdrvo area.

The conference was officially opened with welcoming speeches by Smart RI Board member Tina Ragužin, the City of Rijeka’s mayor Marko Filipović, Marko Markić, Director of the Directorate for EU Programs and Projects, European and International Affairs-Ministry of Economy and Sustainable Development of the Republic of Croatia, and the former Rijeka’s mayor Vojko Obersnel. 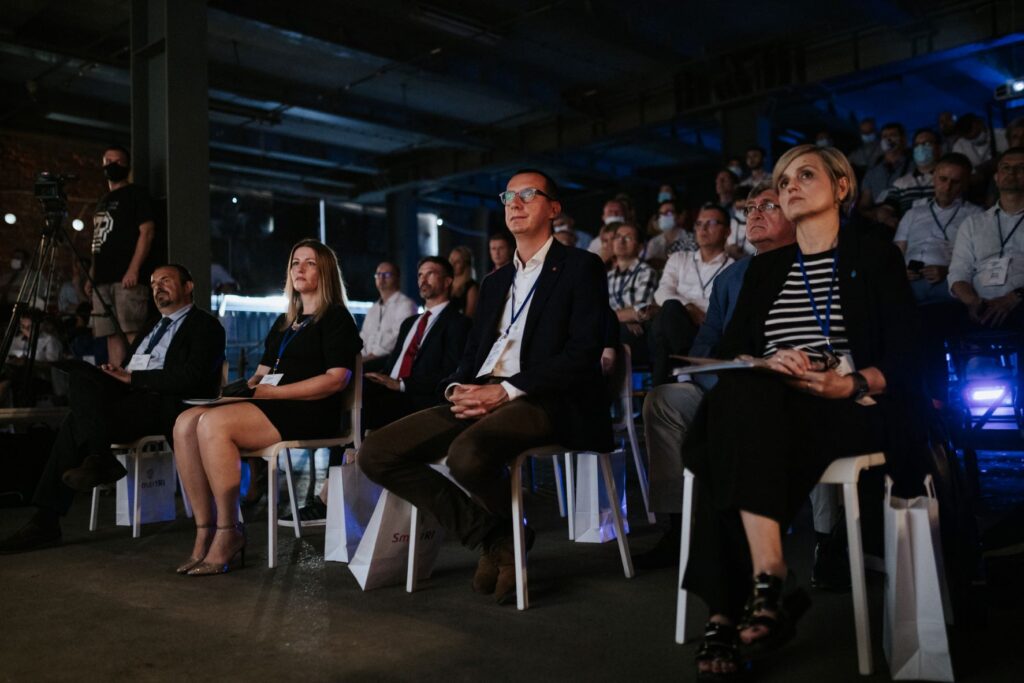 As Tina Ragužin pointed out, this project’s preparation lasted five years, the project had been implemented for a year under the covid crisis conditions requiring some adjustments, but nevertheless everything was according to the plan. “The concrete project’s results are already visible, and I am confident that all the set goals will be achieved within the set deadline. I would like to take this opportunity to thank all the partners for their dedicated work on this project, the City of Rijeka and the former mayor Obersnel, as well as the current mayor Filipović who provides a great support for the development of this project, ” said Ragužin.

Mayor Filipović highlighted that a decision had been made at the European Union level to make digitalisation the foundation on which the European economy would develop over the next seven years, which was clearly defined in the European budget proposal. “For this reason, it is crucial for the cities to recognize cooperation with economists, the University, and the Centers for Innovation and Science, and it is safe to say that Rijeka is a leader in this matter within Croatia. This is proven by the fact that Smart RI was founded, a special company that is also this project’s applicant, but also the fact that the City of Rijeka’s utility companies participate in the project as well. On this occasion, I congratulate all the project partners wishing that the project generates ideas that will make the lives of our fellow citizens better,” said the mayor, adding that the city administration is always supportive of such important projects. 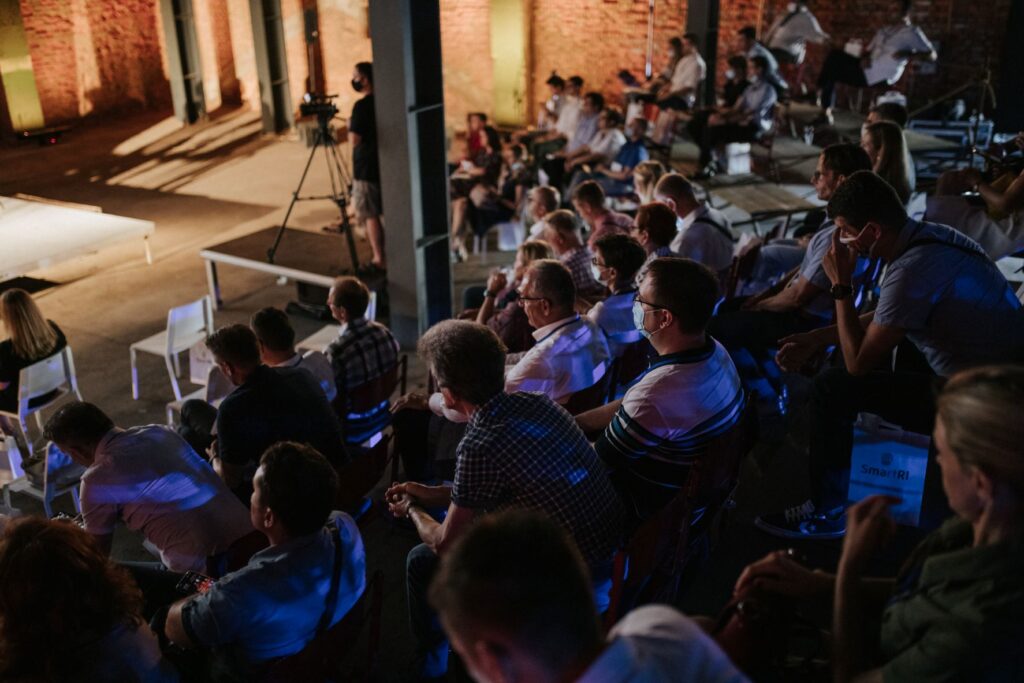 The Director of the Directorate for EU Programs and Projects, European and International Affairs at the Ministry of Economy and Sustainable Development, Marko Markić, said in his speech that the cooperation of a large number of partners shows the potential of this project. “Cooperation between public companies and scientific institutions, as well as private entrepreneurs is the capital that leads in the right direction, and I truly believe in the success of this project,” said Markić.

The former Rijeka’s mayor, Vojko Obersnel said that he would be pleased to continue to monitor the development of this project. “Rijeka has always been prone to innovation and during my tenure I tried to foster projects that encourage further development of information technologies, digitalization of the city administration, and utility companies, and I believe that as a city, we have been successful in this so far. We can be proud of the fact that the project involves 20 partners not only from Rijeka and Primorsko-Goranska County, but from the entire Croatia. I am confident that this project will result in a number of new innovative solutions for informatization and digitization of various processes from traffic management to water distribution. This Competence Center is another opportunity for Rijeka to show that it is always striving for new and innovative solutions, ” concluded Obersnel. 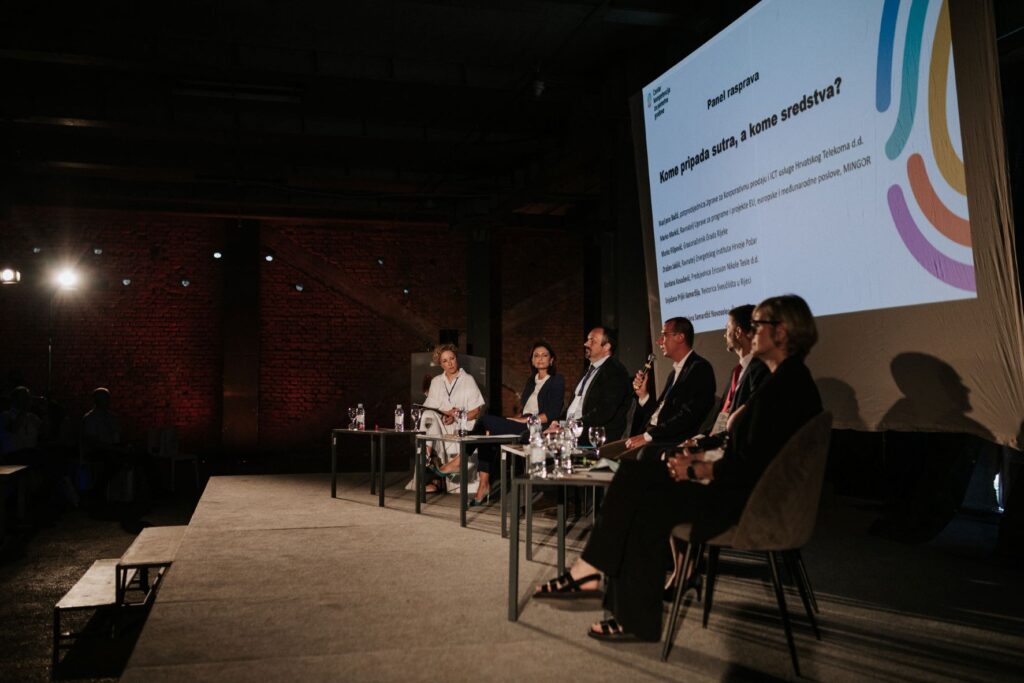 The central part of the conference included a panel discussion entitled “To Whom Does Tomorrow Belong, and Who Gets the Funds?” with the following speakers Marijana Bačić, Vice President of the Corporate Sales and ICT Services of Hrvatski Telekom; Marko Markić, Director of the Directorate for EU Programs and Projects, European and International Affairs-the Ministry of Economy and Sustainable Development of the Republic of Croatia, Rijeka’s mayor Marko Filipović; Director of Hrvoje Požar Energy Institute, Dražen Jakšić; President of Ericsson Nikola Tesla, Gordana Kovačević, and the University of Rijeka’s Rector, Snježana Prijić – Samaržija.

The discussion was moderated by Mirjana Samardžić Novoselec, an Apsolon Ltd. board member, who also held an introductory lecture on the panel discussion entitled “Cities of the future – how to reach them?”

The highlighted panel discussion’s conclusions included the importance of speed in placing innovative solutions on the market, reactions to changes, and human capacity strengthening.

“After the first announcements of the implementation of digital covid passports, Ericsson Nikola Tesla acted quickly, and along with its partners, was the first in the EU to develop and implement an application to verify the vaccination certificate against COVID-19. With this step, Croatia has positioned itself as a leader, ” said Gordana Kovačević, the president of Ericsson Nikola Tesla. Kovačević emphasized the importance of investing in infrastructure, which is the basis for the development and implementation of all innovations.

“Despite unfavorable conditions, we hired 200 new IT professionals in 2020, and over 220 in the first half of 2021. The needs exceed what the labor market currently offers, therefore it is necessary to establish stronger cooperation with higher education institutions,” Kovačević concluded.

“All universities must recognize the moment and open up to further cooperation with the business system. New ecosystems that gather the business, public, and scientific research sectors are extremely important, “said Snježana Prijić-Samaržija, the University of Rijeka’s Rector, and also announced the University’s new infrastructure projects.

“Apart from the Innovation arena, which will deal with shipbuilding and maritime affairs, innovation and green technologies, 600 million HRK from the National Recovery and Resilience Plan is earmarked for higher education reform, which will establish a so-called Virtual Campus that will enable faster connections with citizens,” Prijić-Samaržija concluded. 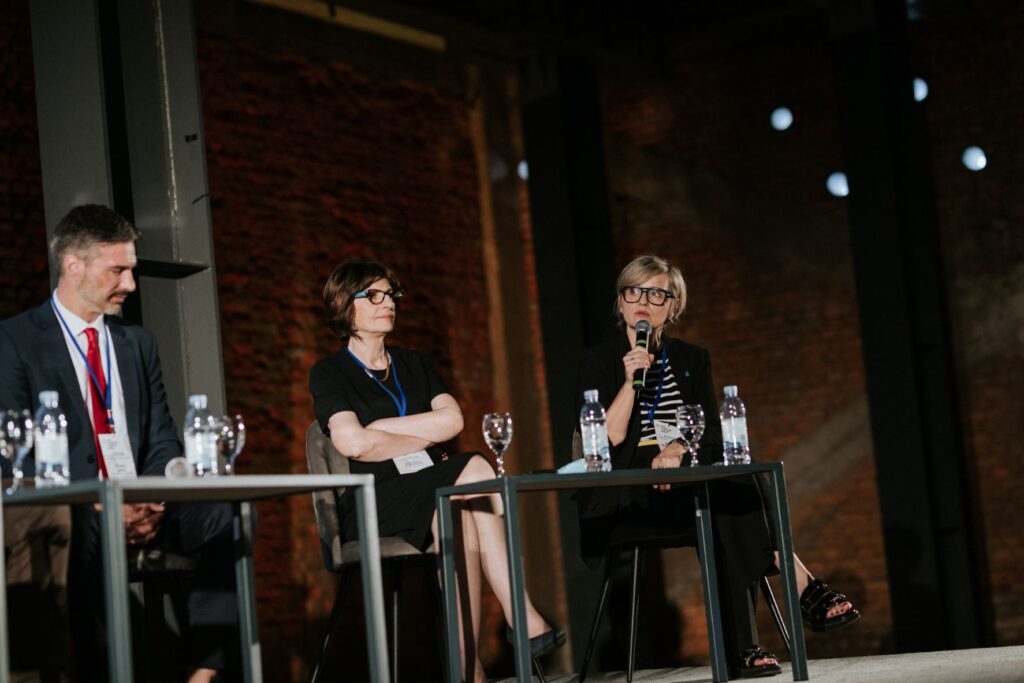 Marko Markić from the Ministry of Economy and Sustainable Development announced a stronger role of local self-government units in the process of allocating EU funds for the upcoming financial period and pointed out that almost twice as many grants had been provided.

“High level of centralization has been quite a challenge so far, although Rijeka has responded well to it in a form of strategic projects in the field of heating, water supply and sewerage, public transport, etc. As a record holder in EU funds withdrawal, the City of Rijeka has already prepared projects in the pharmaceutical industry and shipbuilding” stated Marko Filipović, the city of Rijeka’s mayor.

“The direction of the city of Rijeka’s development is set by the 2021-2027 City of Rijeka Development Plan, and we will have four years of work to achieve the set goals by stirring the city in a new direction,” concluded Filipović.

Marijana Bačić, the Vice President of the Corporate Sales and ICT Services of Hrvatski Telekom, pointed out some of HT’s solutions within the smart city platform.

“HT has established the largest network of electric vehicle charging stations in the region, and Smart parking is a product that directly contributes to reducing harmful gas emissions. We are particularly proud of our broadband project co-financed by the EU, which provides outside the city residents with the same Internet quality and advanced technology services just as in large cities, ” said Bačić.

Dražen Jakšić, director of Hrvoje Požar Energy Institute, expressed satisfaction that topics such as energy efficiency, strategic energy planning, and climate change have come into the focus of the general public and political leadership.

The afternoon part of the program introduced subprojects of the Competence Center for Smart Cities. 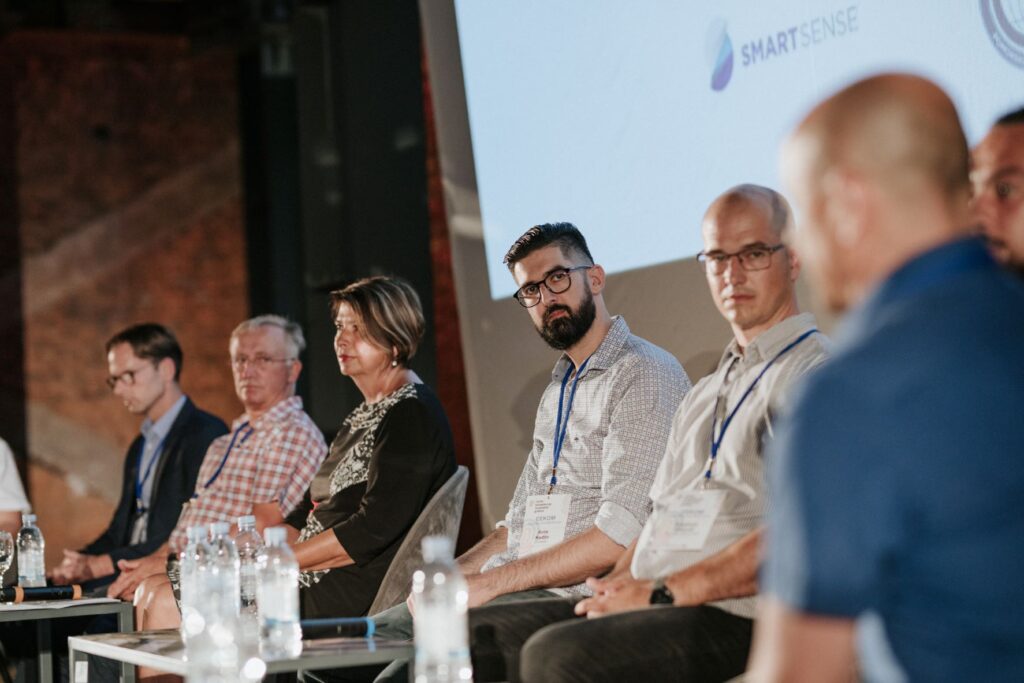 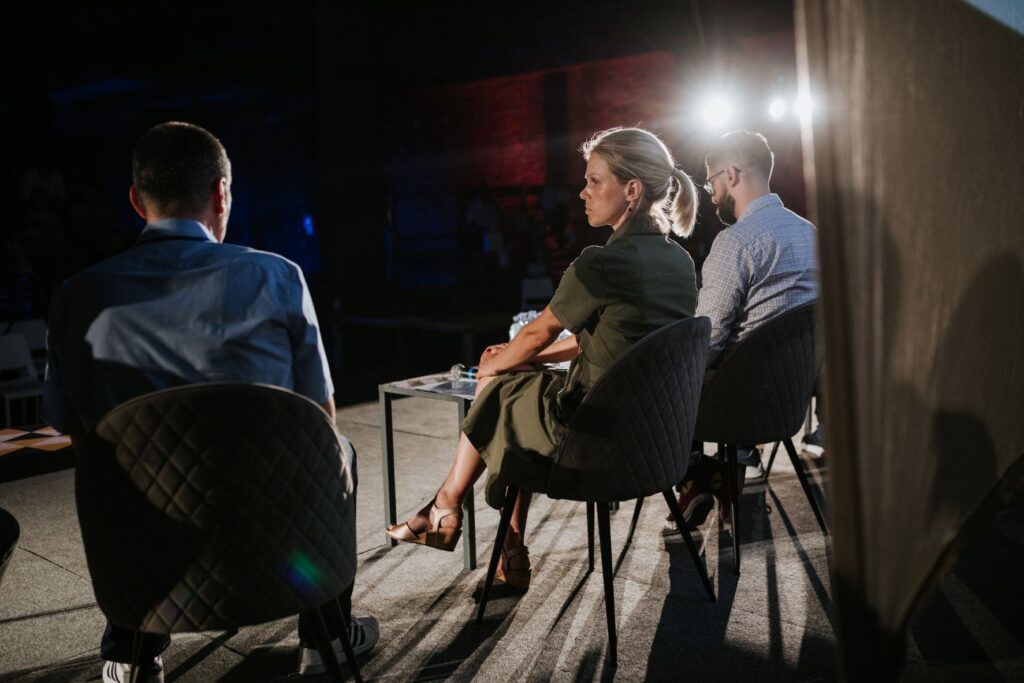 In the next two years, during the project implementation period, the project partners will develop as many as 36 innovative products and services in the field of smart city technology with significant market potential. The holder and applicant of the the Competence Center for Smart Cities project is the company Smart RI Ltd. whose founder is the City of Rijeka. Smart RI, and thus the city of Rijeka, will become a test and demonstration center for “smart” technologies, where pilot projects will be conducted to improve products and/or services up to the level of readiness for commercialization. 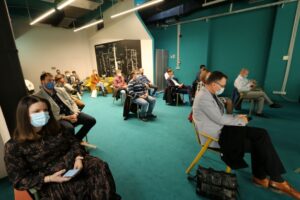 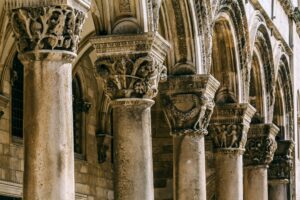 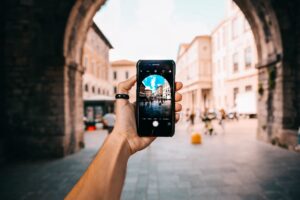